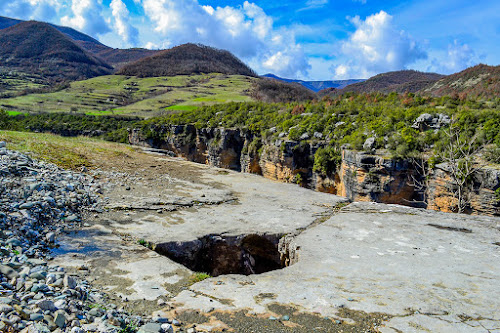 Found near the Osumi Canyons, 800m away from the village of Bagazi, there is a hollow cavity with a length of 7-8m and a diameter of around 2m. This place has a special history connected to an old tale. The tale goes like this: A bride forced to abide by the old traditions was forced to marry against her will. The bride’s inlaws were returning with her to their village, but when they arrived, the bride said to them “you are taking me to this man against my will” but her inlaws didn’t answer. Therefore, the bride decided to create a plan to escape. Praying to God while looking at the Canyons she said “Open, o rock, to save me from my anguish” The rock listened and before her appeared a hole or “cavity”. The bride threw herself from her horse and hid inside the hole. Her inlaws returned to the village without her. Later, this place was called the Bride’s hole and was visited by new brides that wanted to have children. They would enter the hole with their clothes on inside out. Inside the hole they would undress and then put their clothes on properly. They would then return to their homes, quieted, knowing that their wish for a child would be granted.
#anglisht
Shpërndaje në rrjete