The Kasabashi Bridge; a monument of culture of First Category -->

The Kasabashi Bridge; a monument of culture of First Category 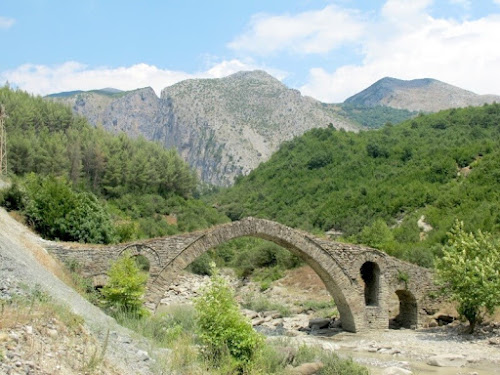 The Kasabashi’s Bridge has been recently proclaimed monument of culture of first category. It`s thought to be constructed around years 1640,near the source of Guhakut from one of the most famous architects of Turkish  Empire, Kasemi, with origin from Gremash of Skrapar this is confirmed by the name of Bridge(Kasabash-Master Kaso-Kasemi). The Bridge of Kasabash is near of town of Çorovodë,in the district of Skrapar. The Kasabashi`s Bridge enters in the typology of symmetries bridges with three archways with ridge and discharging windows. Through this monument of culture passed the road Berat- Skrapar-Korçë. This route has been very important for these districts, because it served as an axis for movement of people and exchanging of goods. The central archway which has a greater volume is represented with a shape construction with a light space until 12m, meanwhile two sides archways are smaller in volume and have a semi-circular shape. The central archway on the top is contoured by a stone cornice 5 cm thick . The discharging windows and the side archways are constructed in a semi-circular shape.  The frontal walls are constructed with black stones from  river and mountain in shape of tiles with thickness no more than 25 cm, meanwhile runs between the stones are so evident . The Kasabashie`s Bridge from the technical construction regards the XVI centaury.
#anglisht
Shpërndaje në rrjete